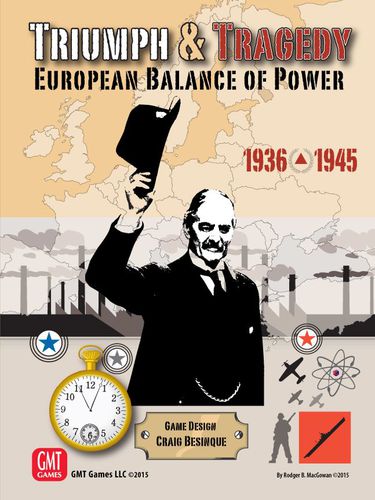 Triumph and Tragedy is a geopolitical strategy game for 3 players (also playable by 2) covering the competition for European supremacy during the period 1935-45 between Capitalism (the West), Communism (the Soviet Union) and Fascism (the Axis). It has diplomatic, economic, technological and military components, and can be won by gaining economic hegemony or technological supremacy (A-bomb), or by vanquishing a rival militarily.

The 22” x 34” area map covers Eurasia to India and the Urals, with the Americas and the eastern British Empire represented abstractly. Military units are 1/2” blocks, of 7 types (Infantry/Tank/Fortress/AirForce/Carrier/Fleet/Submarine), in 6 different colors (Germany/Italy/Russia/Britain/France/USA). The mix of approximately 200 blocks allows great flexibility of force composition. There is a 55-card Action deck and a 55-card Investment deck, plus 30 Peace Dividend chits and 50 markers of various types.
The game starts in 1935, with all 3 Great Powers virtually disarmed: Germany has repudiated the Versailles Peace Treaty, initiating an arms race in Europe. With blocks, the nature of military buildups remain unknown to rivals unless/until military conflict breaks out. The game may end peacefully or there may be war. There are game sanctions for attacking neutral minors or declaring war on an opponent, and rewards for remaining peaceful (you get a Peace Dividend chit of value 0-2 for every year you remain at Peace).

You can win peacefully by:
• Economic Hegemony (total of Production + secret Peace Dividend values is the greatest in 1945, or reaches 25 at any time) OR
• Technological Supremacy (build the A-bomb — which takes 4 stages).
If there is war, you can still win by either of the above methods, or by:
• Military Victory (capture of TWO enemy capitals – each Great Power has 2).
Economic production underlies all forms of power in the game. Production is the LEAST of controlled Population (cities), controlled Resources, and Industry (which starts low and can be built up with Investment cards). Powers can spend their current economic Production on either:
• Military units (new 1-step units or additional steps on existing units), OR
• Action cards, which have Diplomatic values (to gain Population and Resources without conflict) and a Command value (to move military units), OR
• Investment cards, which have Technological values (to enhance unit abilities) and a Factory value (the only way to increase Industry levels).
Building a unit step or buying a card costs 1 Production. Simple. You can’t inspect cards bought until after you have spent all Production.

Initially, the Axis economy is Population/Resource limited, but ahead in [war] Industry, while the West and Russia are Industry-limited, with adequate empires of Population and Resources. Throttling/limiting rival economies by denial of Population/Resources is a key form of competition. In peacetime, this is primarily done via Diplomacy, committing Action cards to gain control minor nations and their Population/Resources, or to deny or reduce Rival control of them. At war, this can be done more directly by military conquest on land, by Naval/Submarine blockade of trade routes at sea, and by Strategic Bombing of enemy Industry by air forces.

The early phase of the game tends to revolve around:
• Diplomatic infighting (using Action cards), to gain minor nations (Czech, Rumania, etc) for their Population and Resources.
• and Industrial buildup (via Investment cards),
• with Military buildups (with the nature of forces being built being unknown to opponents)
• and some Technology advancement (also via Investment cards),
• and some military movement (using Action cards for Command), which can include Violating (attacking) neutral minors to gain Population/Resources when Diplomacy fails.
If the game continues peacefully due to imposing defenses or player inclination, pressure builds as players approach a Production of 20, as secret Peace Dividend chits may take someone over the 25 Victory threshold. Or players may succeed in developing the Atomic Bomb and steal a victory that way.

At some point, however, one Power (seeing opportunity or necessity) may Declare War on another. The victim gets immediate economic benefits in reaction, but military reality comes to the forefront from this point onward. The third party may well continue its economic development in peace. Or not.

Unit movement is by Command card, which specifies a Command Priority letter that determines order of movement/combat and a Command Value number that determines the maximum number of units that can be moved. Command cards are only valid during one specified Season (Spring/Summer/Fall), so a variety of Command cards in one’s hand is necessary for a Power to be able to move in every Season. But HandSizes are limited, so each player must balance competing demands for card resources with military security.

Combat occurs when rival units occupy the same area, and is executed by units firing in order by Type (defenders firing first amongst equal types), rolling dice for hits. Units have different Firepowers (hit values) depending on the Class of unit they are targeting (land, naval, air, sub). Land combat is one round per Season while sea battles are fought to a conclusion. Units without a Supply line lose 1 step per Season and cannot build (except Fortress units which are immune to both effects but cannot move).

Triumph and Tragedy is a true 3-sided game: there is no requirement that the West and Russia be on the same side (and in fact there are valid reasons to attack each each other), and only ONE player can win the game. “Table talk” is allowed (and encouraged) but agreements are not enforceable. Alliances are shifting and cooperation is undependable. The game can continue as an economic battle of attrition or a sudden military explosion can change everything. There is immense replayability as players can pursue dominance in Europe via land, sea or air military superiority, technological supremacy, or economic hegemony without rivals realizing their strategy until it is TOO LATE! It is a highly interactive, tense, fast-moving game with little downtime between player turns, covering THE crucial geopolitical decade of the 20th century in 4-6 hours.
Developer’s Note:

When Craig asked me to work with him on his new game, “Triumph & Tragedy,” I was initially very reluctant. I have a very busy schedule and was really not wanting to add something to my “plate.” Curiosity got the better of me, however, and I had the opportunity to review the game at length. What I found with Craig’s design is one of the most innovative strategic-level WW2 games I’ve ever seen!

Come on, let’s face it: there’s a LOT of start-level WW2 games out there — good ones at that! What Craig’s game does, however, is something I’ve never seen. He’s made the Second World War into a true three-sided conflict. This game will really shine as a 3-player game. One side plays the West, one side plays the Axis, and one side plays the Soviets. Any combination of coalitions is permissible in the game. You can have the Soviets team up with the Axis against the decadent West. Or you could have the West and the Axis forge a stance against communism. Of course, the historical alliance is certainly possible. BUT, and this is a huge part of the game’s attraction for me, ONLY ONE player can win. Even amongst “allies” there will be a nagging suspicion of the other player’s true goals and motives.

With three ways to win (Economic Victory, Military Victory, or Atomic Bomb Deployment), the game is almost certain never to play the same way twice. Technologies can be researched to enhance your military forces. You can keep these developments secret in order to keep your opponents from gaining the same advantages but if you do this, it will narrow your choices as researched technologies take up valuable space in the player’s “hand.” You can also use your resources to gain allies among minor countries, or to put pressure on such countries tilting towards your opponent.

The card-play in this game is some of most compelling I’ve run across. It’s a block game like none other and it can be played to completion in 4-5 hours! I heartily recommend anyone with any interest in WW2 — especially those with a fascination with alt-history to preorder this game.