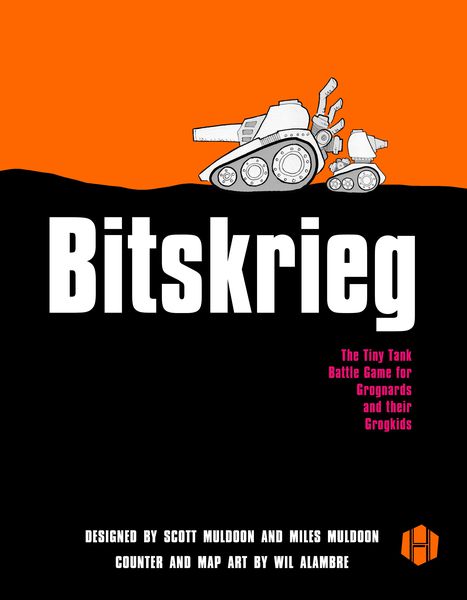 Bitskrieg is a tank battle game, designed to be simple enough to be played with children or grandchildren, while still providing enough tactical challenge to interest wargaming adults. With fewer than forty counters and a single page of rules, Bitskrieg packs a lot of punch in a tiny package.
Terrain is arranged randomly on an eight-by-eight square grid, and players choose sides. You choose your force of five tanks from four different types, each with their own strengths and weaknesses: light, medium, and heavy tanks, and tank destroyers. Place your two flags and the battle is on! You win by destroying all enemy tanks or by capturing both enemy flags.
Play in Bitskrieg alternates with each player activating one tank to move or fire, or using their turn to refresh all their previously-activated tanks. Fire involves simple counting of range and rolling a die to hit, then rolling a die for penetration after a successful hit to destroy the target.
Optional advanced rules include flanking, ramming, bounding fire, stun, terrain types, and more. Bitskrieg handicaps easily, so if luck is not enough for your young one to turn the tables on you, you can customize the experience to find the right balance.