Attack of the 50 Foot Colossi!


Attack of the 50 Foot Colossi! 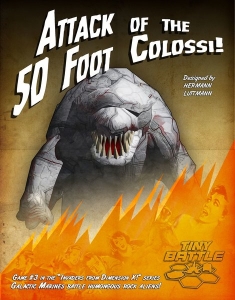 Mayday, Mayday, Mayday! If anyone can hear my voice, there has been a major underground explosion in the Mine here on Graviton Prime. A group of Colossal stone creatures tunneled up from deep beneath the surface and are wreaking havoc. The few remaining miners are panicking and we have no weapons that can damage these creatures. If anyone is out there, please, we need your help!” — Colby Manzo, Mine Boss

Welcome back to the World Beyond. The world of Graviton Prime, to be exact. Miners on this volatile remote planet have sent a distress call out into space in the hopes that someone….anyone….would hear their plea before it was too late. You aren’t just “anyone.” You are the battle-hardened 124th Galactic Marine Raider Battalion, and you were supposed to be enjoying some R&R after crushing your last battle. Never fully at rest, you were assigned the supposedly breezy mission of patrolling a “peaceful” region of space….until your com system buzzed to life with that cry for help.

From the fabulous minds of Hermann Luttmann and Colby Duerk, Attack of the 50 Foot Colossi is the much-awaited follow up to Invaders from Dimension X and Space Vermin from Beyond. Set in the same universe, Colossi provides players with ore carriers full of solo fun and excitement.
• 58 Fearsome Unit Counters
• 30 Operational Markers
• Two Otherworldly 11” x 17” Maps
• One Two-Sided Player Aid Card
• One Full-Color Rulebook
• One Atmospherically-sealed Ziploc Bag
(Dice and Pickaxe Not Included)